It is said that more than 70 % population who need assistive devices don’t have access on it. In experiences of our team, only lack of resources could not be cause for the accessibility while large number of people do not possess any knowledge regarding the assistive device like prosthetics and othortics that could help their rehabilitation program and in preventing disability. Not only this, large number of population have a hesitation on applying devices . The social discrimination still exist in some part of the country that considered disability as result of sin in past life.

The disability act, plan and policy on disability of the country is not bad. But stakeholders are still not clear about the importance of technical aspects in rehabilitation. The professionals are not getting w 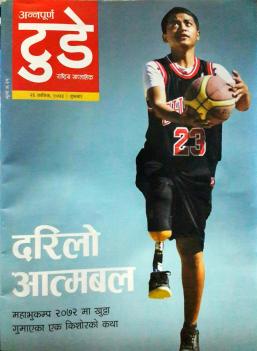 ell opportunity for developing skills and technologies to provide standard services. Government stakeholders are not giving attention for the improvement of the sectors. In this scenario ACT – Nepal came up with new idea to bring one iconic figure who can easily spread awareness to change mind set of people towards disability and importance of technology on it. ACT – Nepal bringing up Nima Rumba, Age 17, an mega earthquake survivor with transtibial amputation as iconic star. ACT – Nepal found Mr. Jeff Erenstone,  Owner Mountain Orthotic and prosthetic Services, New York as a key supporter for this project by arranging Running Blade AllPro from Fillaur  and Anna Manciaz, Texas with her counseling on using Running Blade. Mr. Amit Ratna Bajracharya, CPO, Limb Care Nepal Pvt. Ltd giving his good contribution as technical partner for this project. The socket fabrication, fitting and after service is going on in his supervision.

ACT – Nepal is seeking way forward to bring up Nima as  Amputee Athletes in Nepal and sensitize to the government, stakeholders and mainly to the youngsters who are still binding themselves in social taboo of sin.